skip to main | skip to sidebar

Wells next the sea rally

I've attended the Wells rally three times now.  On the previous two occasions, the locals tried to organise an expedition down the coast, overnighting and returning on the next tide.  Unfortunately, conditions are key to pulling this off and luck wasn't on our side.
This time, it all came together...

After reaching the west cardinal, I motored back to port.

On the afternoon tide, we sailed west to Scolt Head island, at the entrance to of the channel to Burnham Overy.  Winds were SSE F4.  The tide along the North Norfolk coast habitually runs east from a couple of hours before HW, so we were reaching against this, but still making around 4kts.

Reaching Scolt Head Island, we anchored and played in the glorious late afternoon sunshine, waiting for the tide to drop before taking the beach.

Our leader, Peter, had organised the charter of Salford, one of the boats from the Coastal Exploration company.  https://coastalexplorationcompany.co.uk/about/#boats

Early the following morning, we left at sunrise, taking the return tide to Wells.  Winds had freshened to F5 W, daunting at first, but perfect for the return trip. 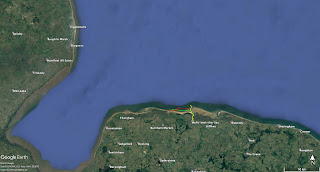 This is a log of sailing activities aboard Daisy II, a 22ft Drascombe Coaster No.280.
Formerly named Aquarius, she was built in July 1997 by Honnor Marine(UK) Ltd of Totnes, Devon. The original Daisy, a Devon Lugger, was purchased in 2005 following an unexpectedly early opportunity to realise a mid-life crisis! Daisy II, with cabin, afforded more scope for overnight stops, and was purchased at the end of 2006.

For several seasons she was moored at Pin Mill on the River Orwell, Suffolk. More recently, the trailer sailing option, utilising a versatile ‘roller coaster’ road trailer, has extended the sailing range. Over the years, we have sailed from various locations off the south coast from Cornwall to Hampshire, a number of inland reservoirs and the Norfolk Broads. However, her key stamping ground is the east coast, usually based around the Harwich area and reaching destinations ranging from North Kent up to Southwold, whilst also launching on the North Norfolk coast at Wells next the Sea. Most recently, a trip from Harwich to Whitby has served only further to whet the appetite: perhaps, one day, Daisy II might complete her journey, in small stages of course, around the UK!

(distances recorded, since the beginning of 2009, using Garmin GPS technology)